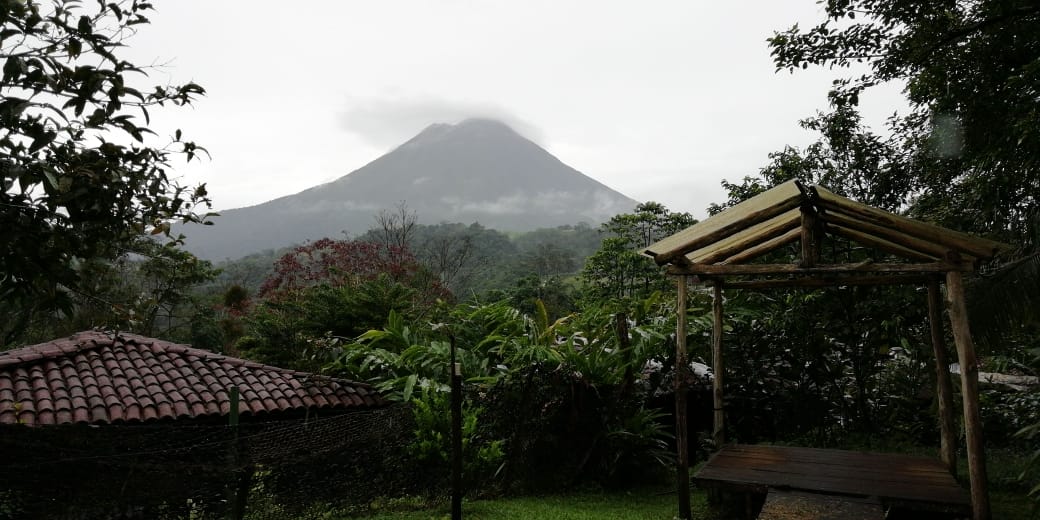 Imagine opening the door of your hotel room and seeing a volcano right in front of you! That’s what the high school Spanish immersion students almost had in La Fortuna this past weekend (it was very cloudy, so we couldn’t really see the top). The owner of Hotel Kokoro where we stayed sent us this beautiful photo of Volcán Arenal after we left when the clouds dispersed!

Our group of 23 high school students participating in a Spanish Immersion trip left Santo Domingo, Costa Rica on Sunday morning to spend three days in La Fortuna. The group was finishing up their second week of Spanish Immersion and were looking forward to some relaxing after a long week of Spanish classes and community service work. On the way we stopped in Sarchi to see the world’s biggest Oxcart. We also learned how the carts are made using a hydraulic system. Basically a water wheel provides electricity to the shop, it’s quite amazing! 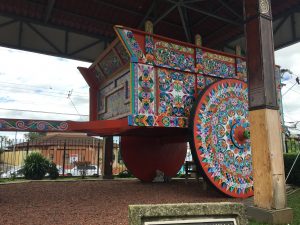 The group arrived in La Fortuna and enjoyed some downtime and swimming at Hotel Kokoro before heading out to dinner in town. The students were challenged with the task of speaking only en Español during our meal. This is an immersion trip, after all! They all thoroughly enjoyed the task and were able to complete it using minimal English. During the week students stay with host families where they speak only in Spanish, so us trip leaders wanted to make sure they continued speaking primarily in Spanish even though they were surrounded by their English-speaking peers.

Monday we went on a hike through the rain forest of Arenal National Park. We saw (but did not touch!) venomous snakes, butterflies, waterfalls, and many types of plants (some of which we were able to touch). We walked over four suspension bridges, which was a conquering of fears for some participants! Our tour guide spoke only in Spanish (keeping up with our Spanish Immersion) and students seemed to understand most of what the guide said and did a great job of asking questions when they weren’t sure. 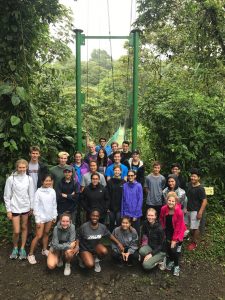 After the hike, some of us went zip lining! This time, instructions were given to us in English to make sure all students knew how to proceed and felt comfortable. We went through seven cables, the first of which was the highest at a whopping 660 meters above the ground. It was called the “Oh My God” cable and after seeing the view, I actually said, “Oh My God!” The students were so brave and enjoyed the adventure a lot! It even rained on us at one point, but no one complained one bit!

After a very tiring day, we returned to the hotel and ate dinner there followed by more swimming in the pool and hot spring on site. Needless to say, we all went to bed early that night!

Tuesday we started our day with a steep descent down 500 steps to Catarata La Fortuna (La Fortuna Waterfall). Because of the rainy season, we were not able to swim in the waterfall pool, but a bit further downstream we found the perfect swimming area. The students enjoyed the crisp water for almost two hours before beginning the trek back up to the parking lot. 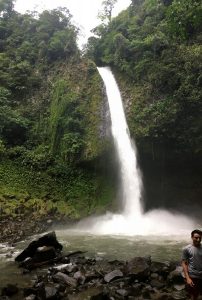 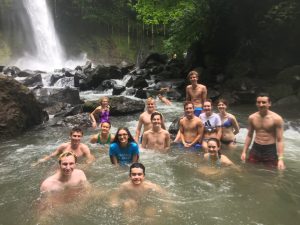 After a quick lunch and a pit stop at the hotel, we continued on to Baldi Hot Springs Resort and Spa. I can’t even describe the beauty of this resort, and because of all the water I have limited photos, but there were 25 thermal water pools of varying temperatures (cold, warm, and hot) and one even had three water slides! Imagine being able to swim in a hot-tub temperature pool. It was amazing. The students had fun holding competitions to see who could skid the farthest on the water out of the slides! It was quite incredible. You know how it looks when you skip stones on the water? That’s what these students were doing with their bodies! It was super fun. We enjoyed a buffet dinner and more swimming until 8 o’clock and then returned to the hotel for our final night.

For our final morning together we circled up and shared our rosas y espinas about the past two weeks. Students’ roses (the good experiences) ranged from experiencing a new culture to making new friends to being able to communicate with their host family. Thorns (not so good experiences) included lack of hot water, missing friends and family back home, and never really being dry (due to humidity and rain)! Students did a great job of using Spanish and Spanglish to share their experiences.

Our days in La Fortuna were the perfect end to the first two weeks in Costa Rica. While it felt like a relaxing break from a hard week of volunteer work and Spanish classes, it was also a great experience for the students to continue using Spanish in restaurants, shopping, and with each other. 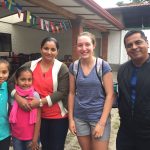 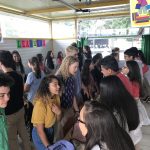 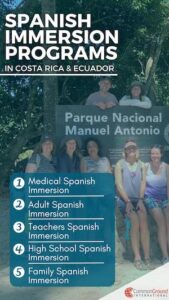